As part of International Women’s Day 2020 the IABA Ulster Branch ran a number of projects to celebrate females in boxing. 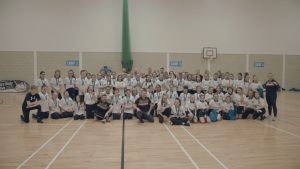 Friday 6th March 2020 saw almost 200 young females come together at Lisnasharragh Leisure Centre in East Belfast to take part in a boxing session and celebration of females in sport.

This was a cross community event with four different secondary schools taking part and eight local boxing club coaches from across the city delivering coaching and activities.

The day was a great success with the mayor and local councillors in attendance showing their support for the event. Boxing is a huge part of the culture of Belfast and the aim of this event was to encourage more females to take part and stay involved in the sport, helping to boost club membership across the city.

Each school in attendance has given great feedback with some pupils having since visited their local clubs to take part in taster sessions. We have organised future sessions with these schools to be led during school hours as the pupils enjoyed the day so much.

The IABA Ulster Branch put out an expression of interest for clubs across Northern Ireland to get involved in the International Women’s Day celebrations by delivering Taster Sessions or Celebration Events within their clubs over the course of the 7th and 8th March. 15 affiliated clubs registered to take part (Cairnlodge ABC, Kronk BC, Star BC, City of Belfast BA, Holy Trinity ABC, Holy Family ABC, Gleann ABC, Tullylish ABC, Saints ABC, Dockers ABC, Corpus Christi ABC, Banbridge ABC, Ormo Boxing Club, Portadown Community BC and Canal ABC) with 334 women and girls taking part over the weekend. Thank you to all those clubs who took part.